The Gamma Knife and the CyberKnife System are similar in that they are both clinically proven systems for delivering high dose radiation to tumors with sub-millimeter precision. However, that’s where the similarities end. The CyberKnife System has evolved from the conventional technology of the Gamma Knife to improve patient comfort during and after treatment and expand where treatment can be delivered The CyberKnife System uses dedicated stereotactic radiosurgery (SRS), just as Gamma Knife does, but it is also capable of delivering stereotactic body radiation therapy (SBRT), also called stereotactic ablative radiotherapy (SABR), which enables it to perform treatments throughout the body – not just the brain and cervical spine.

SRS is used by both systems to treat brain tumors, vascular lesions and functional disorders such as, acoustic neuroma, trigeminal neuralgia and AVM. SRS is typically used as a primary treatment of operable, inoperable or recurrent brain tumors. But it also can be used in combination with surgery, chemotherapy and other treatments. Despite the fact that the Gamma Knife and the CyberKnife System can deliver SRS, there are key differences between them. For example, the CyberKnife System is not limited to treating the brain; it also can deliver SBRT and SABR throughout the body. For more comparisons, see the chart below:

As we can see from the table above, there are several key differences between Gamma Knife and CyberKnife treatments.

For patients, Gamma Knife treatments are more painful and often result in greater side effects. Because Gamma Knife requires an invasive head frame be bolted into the skull, the entire treatment process – imaging, treatment plans and treatment – must happen in one day. Typically, the head frame is mounted to the patient’s skull in the morning, followed by scans to map out where the tumor is. The patient then waits in the hospital during the treatment planning process, which can take several hours, all while having the metal head frame bolted to their skull. Following the planning process, the patient is then fixed to the treatment table, and a single radiation dose is delivered to the tumor.

The CyberKnife, however, relies on non-invasive, real-time motion tracking technology for accurate delivery of high-dose radiation therapy. Instead of a bulky head frame, CyberKnife patients need only use a soft, mesh mask during treatment.

Treatments with CyberKnife are much more flexible. Imaging is performed several days before treatments, allowing the radiation oncologist time to design and finalize a customized treatment plan. Once the plan is set in place, the patient will return for a non-invasive, pain-free experience. Using advanced tumor-tracking technology, the CyberKnife System is able to either deliver one single high-dose treatment, or smaller, precise doses over the course of two to five days. This approach limits side effects and enables most patients to return to their regular routine that same day. Additionally, clinical studies have shown that patients with certain cancerous and non-cancerous conditions in the brain, head and neck, and spine have a better outcome when a lower dose of two to five fractionated radiation treatments over the course of a few days, than a single, large dose. 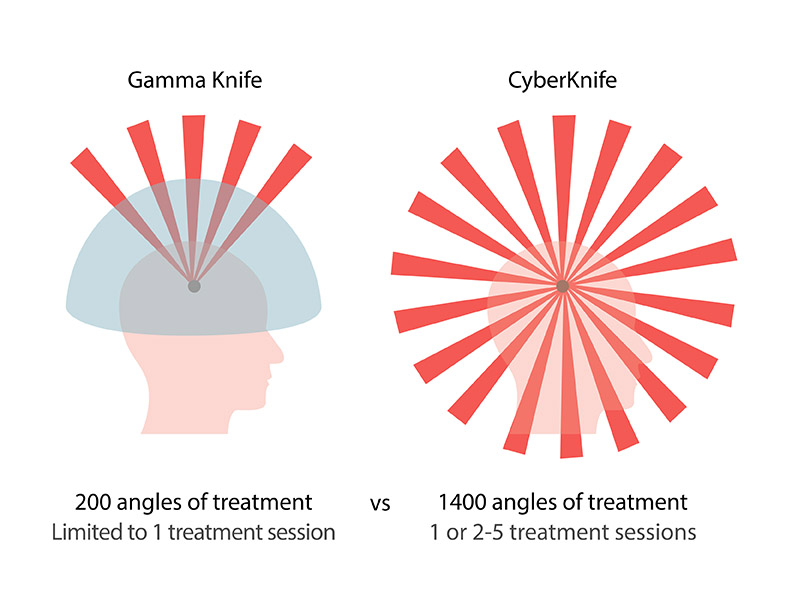 Another point of comparison between the two systems is the method of radiation delivery. The high-intensity radiation therapy used by Gamma Knife concentrates on a single, targeted area, delivering multiple, radiation beams simultaneously to the tumor location to kill cancer cells and shrink tumors while avoiding healthy tissues. The CyberKnife System, instead, focuses a single, high-energy photon beam directly to the target area, and by utilizing real-time motion tracking technology, the CyberKnife is able to deliver radiation from the most advantageous angle around the patient, ensuring effective delivery. The Gamma Knife is limited in the number of angles it can approach the tumor, while the CyberKnife can deliver radiation from thousands of angles, limiting the impact of radiation on healthy tissue or organs surrounding the tumor. 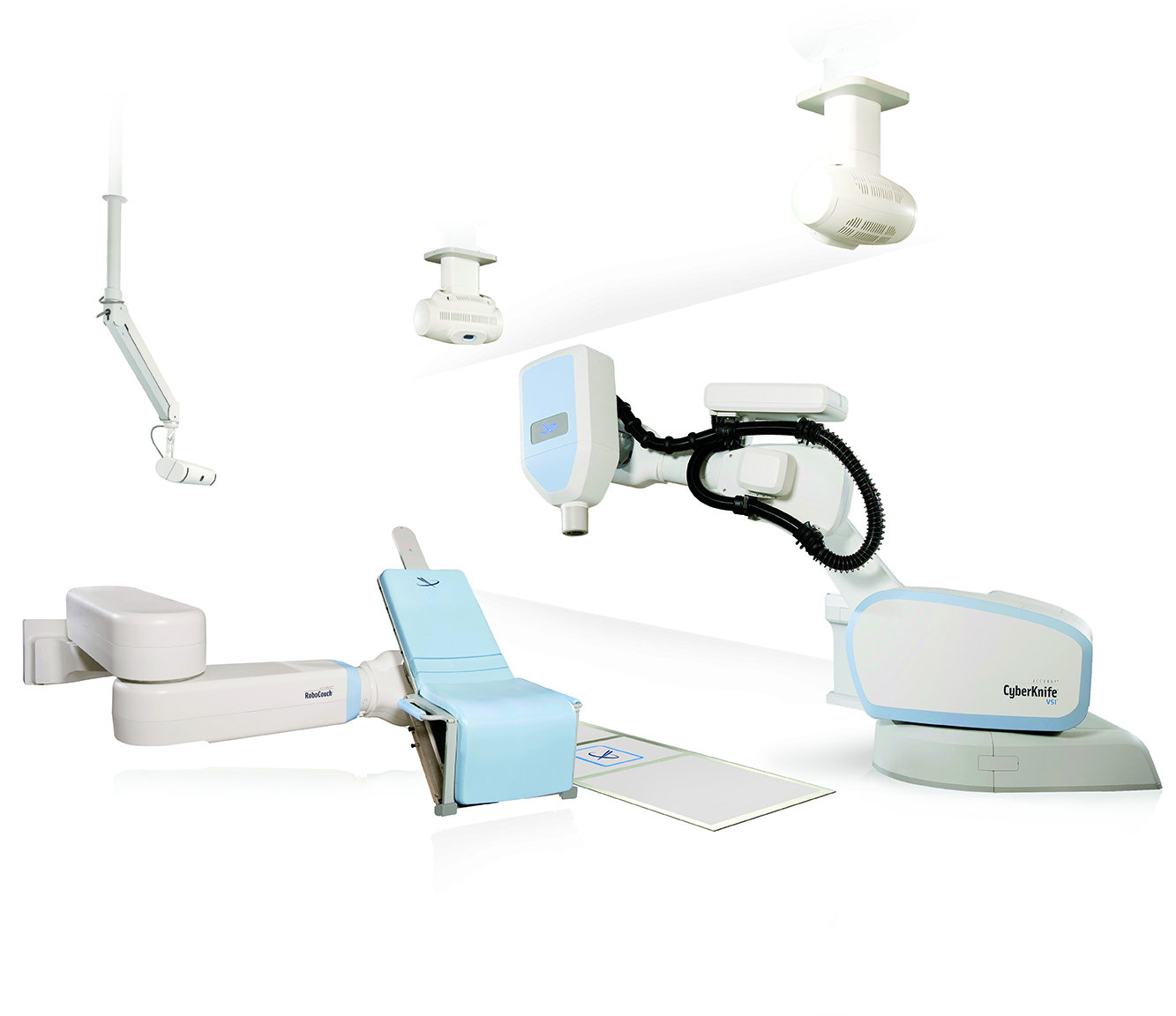 The CyberKnife System’s revolutionary advancements enable treatment of tumors in the brain, head and neck, spine, lung, prostate, liver, pancreas, kidney and more. The precision of the CyberKnife System and freedom from invasive head and body frames have also opened the realm of treatments to recurrent tumors, that were once thought untreatable after previous radiation or surgery.

Our top priority is the health and safety of our patients. Treatments will continue as our staff is taking extra precautionary measures to ensure the safety of all patients. We are working closely with local and national health authorities to stay informed on all important developments.

Phoenix Cyberknife Radiation Oncology is dedicated to the health and safety of our employees, patients, and their families. With the recent spread of COVID-19 and the height of cold and flu season, it is important to be mindful of not only yourself but others around you as well. These viruses are spread from person to person through coughing, sneezing, contact with contaminated surfaces and close personal contact. If you are experiencing any of the following symptoms: runny nose, dry cough, low-grade fevers or shortness of breath; please contact our office prior to your appointment for further instruction

Click here for more information for the Arizona Department of Health Services.